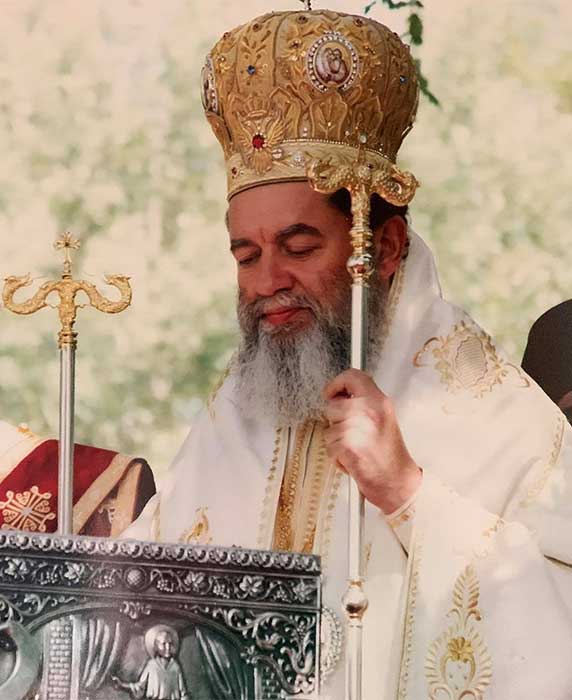 His Eminence the Metropolitan Bishop of Chalkis Chrysostomos (Konstantinos Triantafyllou), was born in Vasiliko, Chalkis in 1957. He studied at the Rizarion Ecclesiastical School of Athens and the Theological School of the University of Athens, from which he graduated in 1981.

He became Monk in the Holy Monastery of Agios Georgios Arma at Fylla, Chalkis and was ordained a Deacon and Presbyter in the Cathedral of Agios Dimitrios at Chalkis by his predecessor and mentor, the late Metropolitan of Chalkis Chrysostomos of blessed memory the first in 1983.

He served as Preacher and General Hierarchical Commissioner of the Holy Metropolis of Chalkis and developed missionary activity throughout our Local Church.

He particularly served the field of Youth through the Catechism of the Holy Metropolis, the relationship with the students of the Schools and demonstrated special care for the candidate Clergy, many of whom he introduced to the Priesthood. He also cultivated the field of Holy Confession with special care and genuine ecclesiastical spirit.

In 1988 he received a Master’s degree from the Department of Worship, Archaeology and Art (specialisation in Liturgics) at the Theological School of the Aristotle University of Thessaloniki.

He was elected Metropolitan Bishop of Chalkis on December 14, 2001, and was enthroned in our Cathedral on 12 January, 2002.

Necessary Always Enabled
Necessary cookies are absolutely essential for the website to function properly. This category only includes cookies that ensures basic functionalities and security features of the website. These cookies do not store any personal information.
Non-necessary
Any cookies that may not be particularly necessary for the website to function and is used specifically to collect user personal data via analytics, ads, other embedded contents are termed as non-necessary cookies. It is mandatory to procure user consent prior to running these cookies on your website.
SAVE & ACCEPT
Go to Top